Put up a billboard in oppostiion.

In a recent news article titled “Wyoming remains premier spot for hunting” the auhor discussed many things hunting, but one thing stood out to us; how two billboards with opposing views were put up directly behind one another.

According to the article “one billboard…features a hunter and an enormous grizzly, and the words, “Welcome To Wyoming. Here We Hunt, Trap, Shoot, And Wear Fur.” Behind it is another billboard, featuring a picture of a baby wolf and a message reading “Odds Are This Wolf Pup Won’t Live To See Her First Birthday.”

Sportsman can apprecaite this response by Scott Weber, a local hunter and gun dealer who put up the pro hunting billboard as a response.

The article goes on; “there are degrees of opposition to hunting in American society. Some organizations want all hunting banned forever. Others are OK with traditional subsistence hunting to feed families, but oppose trophy hunting. The Humane Society of the United States is another group which opposes hunting. The HSUS has attacked several longstanding hunting policies in courts and helped fund voter initiatives in different states.”

Sportsmen must be aware that these attacks on our hunting rights are escalting.  The purchase of a billboard was a terrific response by Mr. Weber. When interviewd for the article he said  “we’ve got to keep the pressure on those anti-hunters.”

WYHAA Response to the Anti-Hunters

Wyomingites love our public lands, our right to hunt, and our ability to own guns. These are issues where there is no compromise, these are our “cold dead hands” issues. 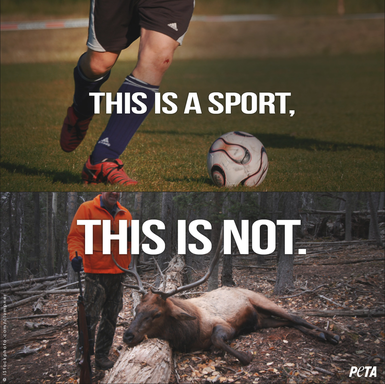 This advertisement was created by PETA, their website says ““Hunting is often called a sport as a way to pass off a cruel, needless killing spree as a socially acceptable, wholesome activity.”

Outsiders are moving in. Billboards are being purchased and we cannot afford to let their actions go unchecked.

We need to send a strong message to these Anti-Hunters as they continue to push their agenda.  Will you join the fight?

Please contribute to our efforts, the petition below allows you to answer the question “Why is Hunting a Sport.” A brief answer will be a valuable resource. Even more important is to sign up for email updates so we can notify you when new threats arise.